Why does an electronic paper screen flicker?

Why will an e-paper screen sometimes blink when updating content? Flickering is a consequence of how eink technology works, but can be avoided by choosing the right screen update or by turning to ever better displays on the market.

The flicker in updating an e-paper screen is a consequence of how the technology creates pictures and text and also depends on the type of update a signage integrator will select.

An electronic paper screen can sometimes ‘blink’, briefly flicker while updating the image displayed. This is a consequence of how e-paper creates pictures and text and also depends on the type of update a signage integrator will select for their e-sign.

Screen blinks can be avoided by turning to a different type of display update or by choosing from the ever more versatile and usable e-ink displays available on the market, the features of some of which already support the absence of blink.

Any digital image, even simple letters on a white backdrop, is made up of millions of pixels, the smallest controllable elements of a picture represented on screen. When the picture is changed, every pixel has to be updated to reflect the new state.

In an LCD screen the pixels are always ‘on’ (because the LCD screen is always on – see why in the chapter explaining refresh and update rates) and will never move from their spot, which results in their being no picture change-induced screen flicker.

In LCD displays the pixels will not flash between frames because they are refreshed by liquid crystals rotating polarized light. Every time the on-screen picture switches, the LCD crystals of a pixel twist their position to either allow light to pass or to block it out. This in turn enables the display to draw an image – black and white in monochrome screens and color in screens with an added RGB filter.

On the other hand, for an e-paper pixel to change, the elements it is made up of have to be reactivated and moved from their original positions to new ones within the screen film, the consequence of which can sometimes be that the display will blink between frames to create a better image.

Turning every pixel from white to black and then back to white helps normalize the contrast of the pixels and prevents ghosting, which is why the screen will sometimes ‘blink’ when loading a new image.

Made up of small capsules containing tiny particles of colored ink, an e-paper screen will render an image by moving the ink particles to the surface of the display and arranging them into patterns. Once the ink particles of a pixel are in place, they won’t move until the next electric charge rearranges them in another pattern – even if there is no power to the screen.

But because the eink particles are static until a power surge moves them, the shadow of the previous image can sometimes remain visible after refreshing parts of the screen. This effect is called ‘ghosting’ and can be solved by refreshing the screen between frames.

Turning every pixel from white to black and then back to white helps normalize the contrast of the pixels and prevents ghosting, which is why the screen will sometimes ‘blink’ when loading a new image – sometimes, but not always. 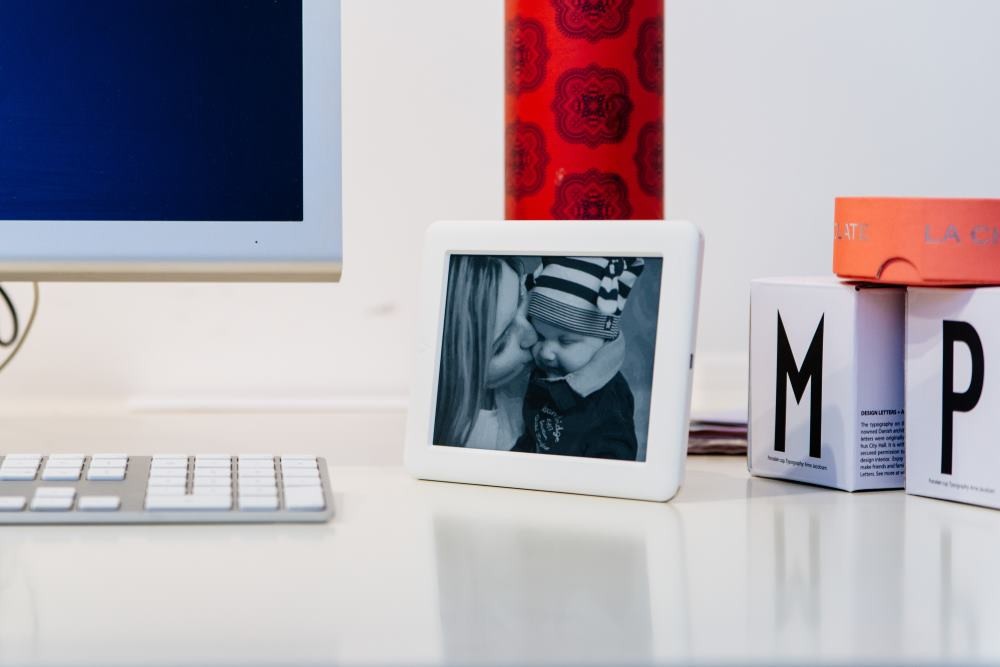 An LCD screen will feature no refresh-induced flicker, while e-paper might blink when updating the screen content. An electronic paper screen, however, will feature better visibility in all light conditions and have a much longer battery life – which also means it can be completely cordless.

The reasons above are also why, when talking about updating the content of an electronic paper display, we cannot really speak of its refresh rate, but rather its update rate.

THE IMPORTANCE OF THE REFRESH RATE

A screen’s refresh rate is the is the number of times in a second that an electronic display will update its buffer to show an image; it the value is set at, for example, 20 Hz, the display will draw 20 images per second to retain what is outlined on screen.

An e-paper display holds an image in perpetuity even without power; this makes electronic paper extremely energy efficient, meaning that it can run for years on a single battery charge.

With LCD monitors the refresh rate is usually set at 50 Hz  or more – this means that to display content, an LCD display will have to redraw its screen 50 times every second, even when showing a static image like a photo. The upside: a screen capable of vibrant, complex images. The downside: an ‘always on’ screen with heavy energy consumption, requiring the display to have constant access to the electrical circuit and limiting its deployment possibilities. Unplug the power, and the screen will go dark.

Electronic paper, on the other hand, steers clear of this problem entirely by not relying on a refresh rate at all – rather, the correct term to use in discussing e-paper display updates is the update rate.

WHAT IS AN UPDATE RATE?

In electronic paper the ‘refreshing’ of screen content relies solely on the signage integrator and the frequency with which they want to change the image displayed. This is why we speak of an e-paper’s update rate – the number of times in a particular timeframe that the owner of the electronic paper display chooses to switch what is shown on screen. 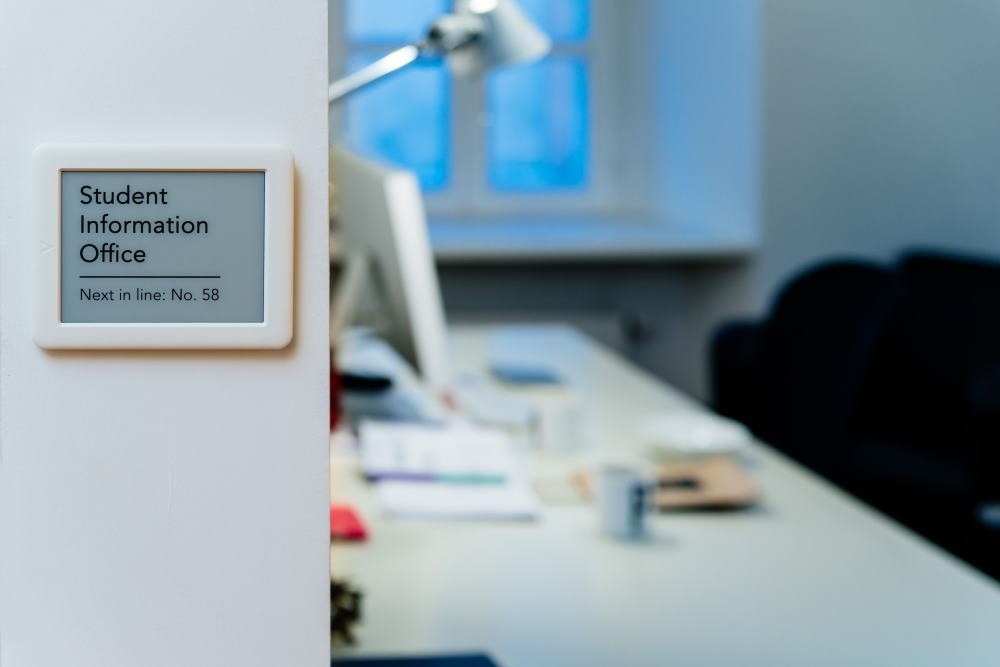 In electronic paper displays there is no refresh rate to speak of – the correct term to use is ‘update rate’, since the number of screen refreshes depends solely on the signage proprietor and how often they need to change what is shown.

Again the secret lies in how eink technology works. As mentioned before, once the ink particles are in a particular position, they won’t move, even if the power supply to the screen is shut off. No refreshing of pixels is necessary, with the display holding the image in perpetuity or until the pixel particles are kick-started back to life.

This makes electronic paper extremely energy efficient: it can run for years on a single battery charge, making cordless applications of the technology more than perfect for in- and outdoor environments – screen flicker and all.

Not that flickering between images is an unavoidable fact in electronic paper displays – quite the contrary: blink can be avoided altogether.

E-paper blink can be avoided altogether: either by choosing between the different types of screen updates available or by turning towards new displays appearing on the market.

One way of doing that is to choose between the different types of screen updates available.

The contents of an electronic paper screen are updated through the Visionect Server and the client’s CMS, where the type of screen update can be set: will you be uploading grayscale images or black and white? The choice will decide whether the display will experience blinking or not – but like with everything else there are both pros and cons in choosing one option over another. It all comes down to the sign’s purpose.

Sending a black and white update to the screen will mean no pesky screen blink, but will also mean a reduction in the quality of what is displayed. Fonts used might have jagged edges and complex pictures can lack in quality. The update itself will be quick, lasting from around 125 ms to 250 ms, but you can expect a certain amount of ghosting.

While the black and white update might not be suitable for displaying pictures or maps, its quick response time will make it perfect for any signs that feature text alone: door signs, shelf labels, countdown timers, traffic signs with real-time warnings and limitations, bus blinds and more.

An update featuring 16 levels of grayscale will feature extreme image quality and beautifully rendered fonts. However, it will take a bit longer, about 750 ms, and the screen will blink when refreshing. This is because the update will either  invert the image while drawing it on screen or color its pixels completely white or black to avoid ghosting.

By selecting the grayscale update, the e-paper display will be able to show anything from your photos to wayfinding information, maps of subway lines, ads and a plethora of other uses.

To deal with the problem of the screen refresh blink you can also look towards more technologically advanced e-paper displays.

Certain e-paper consumer devices already feature non-blinking screens, making it only a matter of time before the same technological advancements preventing flicker are applied to the industrial digital signage segment.

Certain e-paper consumer devices already feature non-blinking screens, making it only a matter of time before the same technological advancements preventing filcker are applied to the industrial digital signage segment.

The e-paper manufacturer E Ink ® has, for example, produced a display that supports a special kind of grayscale update that does not flicker – the Carta display is at the moment available in the 6’’ format only, but with electronic paper’s growing technological advancements, other formats without blink are no doubt sure to follow.