Organizers of Conventa 2014 conference approached us with an ECO agenda – can they substitute their paper schedules and surveys and go fully digital? See how we did it.

Conventa is the premiere SE European exhibition for buyers and sellers in tourism, hospitality and events. The conference is for invitees only and follows strict meeting driven agenda – every exhibitor (hotel, tourism organization, event organizer) gets a list of scheduled meetings with prospective buyers (trip/event organizers). It’s an action packed two day affair with up to 15-20 meetings daily for each exhibitor.

Conventa organizers find prospective buyers and schedule the meetings before the event itself. The list of meetings gets locked down a day or two before the conference and they start printing schedule for each exhibitor.

The print is a thousand page affair.

Organizers fly in prospective buyers to the event and cover their expenses so they better be worth it from the exhibitor’s point-of-view. If they are not, it’s not worth to the exhibitors to present at the convention. To assess the quality of buyers exhibitors fill out a surveys after each meeting, rating each buyer.

Now imagine yourself being an exhibitor, handling back-to-back meetings for the whole day. The last thing you want to do is take a form and fill it out.

It gets even worse for the organizers. They have to take all those answers and enter them by hand into their spreadsheets. Imagine entering 3500+ hand written ratings of prospective buyers – that’s the amount of ratings they would have gotten if every exhibitor rated every meeting he had.

There is a better way.

Organizers of Conventa pride themselves in being lean and environment friendly. They run the Conference with minimal crew of superstar organizers, playing it smart instead of large. The whole exhibition area is build out of nice wooden boxes, which get reused every year. All exhibition booths are standardized which again cuts down on the environmental footprint. It takes them just two days to setup the event and one day to tear it down. 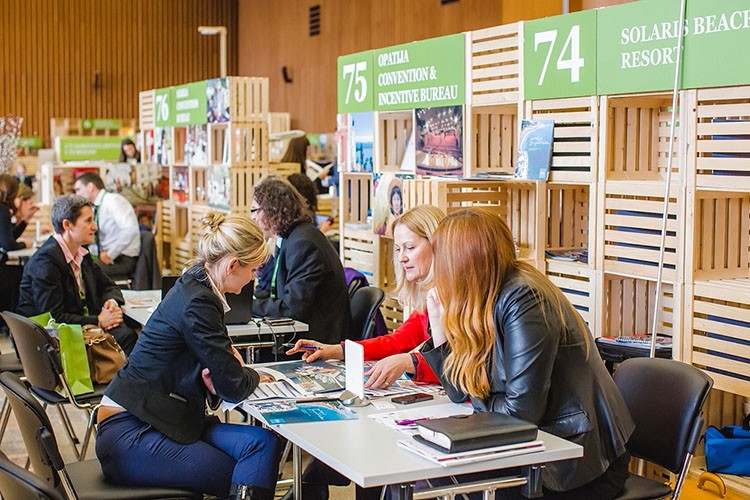 Conventa plays it smart instead of large: the whole exhibition area is build out of nice wooden boxes, which get reused every year.

We took the Django framework as a back end and quickly developed a system where we could import the meeting data provided by Conventa. We took the experiences and code-base from Geoffrey and extended those into a one-off application.

They try to improve the setup every year learning on yesteryears mistakes. This year they decided to try and reduce the amount of paper needed for the event.

So last October we got a call from Gorazd Cad, who is leading the organization behind Conventa, if we could help them with the issue of paper use. Gorazd saw our devices during one of his coffee breaks when he used Geoffrey to order his cappuccino. It is then that he imagined a setup where our devices would supplant the paper schedules given to the exhibitors.

Lets get to work.

We took the Django framework as a back end and quickly developed a system where we could import the meeting data provided by Conventa. We took the experiences and code-base from Geoffrey and extended those into a one-off application.

The app came together in good two weeks. Exhibitors got an interactive schedule which allowed them to easily rate every meeting they had. Death to printed schedules and feedback forms. 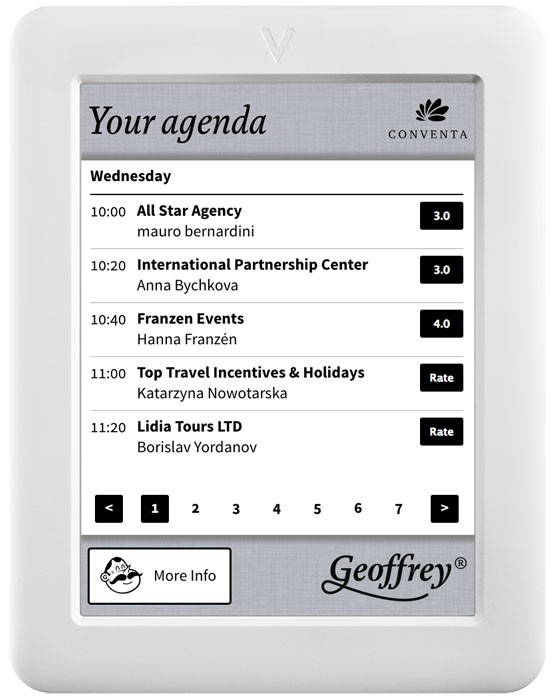 An e-paper tablet supplanting the paper schedules given to Conventa exhibitors.

You can test the app in all its glory on our web.

The scale of the system is quite large, as customers typically deploy smaller numbers of clients to a single server, but it was a a walk in the park. All it took was a standard desktop computer based on an Intel i5 with 16 GBs of rams. We installed the Visionect Server directly on Ubuntu Linux and there were no performance related hiccups.

120 Visionect V-Tablet devices and everything the exhibitors and buyers will bring could be a problem in a single room, but proper Wi-Fi equipment can handle this. A trio of Ruckus access points worked without a hitch.

The system worked as a charm trough out the event. 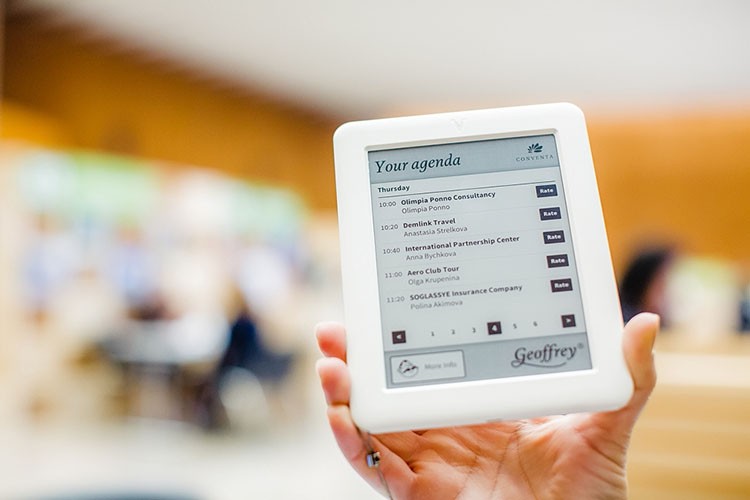 Previous experience with Geoffrey showed us that any friction between the user and any system greatly reduces engagement. Imagine if we were to deploy a web app or a mobile app. How do you convince somebody to take our their phone, install or link some app which they seen for the first time and use it regularly?

An alternative way of solving this issue is to provide an interface which is a part of the environment and that is always there. In front of your face. We knew that this holds true for Geoffrey as guests of bars, restaurants and cafes pick up our device to order food and drinks just because it’s there. On every table.

No enabling NFC or figuring how to install and configure a new app. Zero friction.

Does the same hold true for conventions? Will exhibitors use it? We mounted the device on every table and let it run. 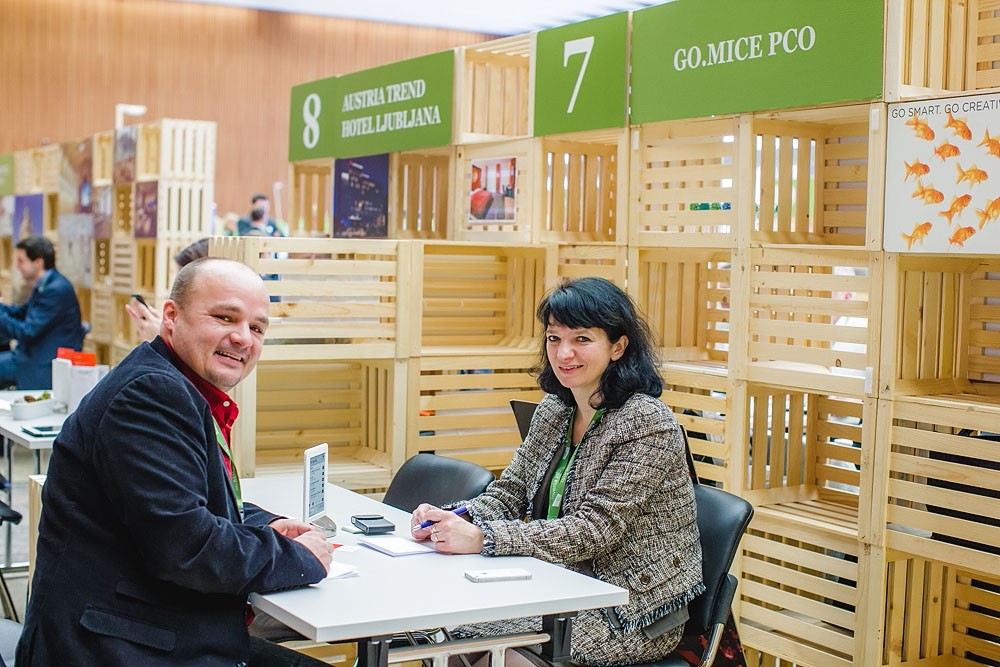 Conventa follows the rules of sustainable management so having our rating system implemented to Goeffrey was right up our alley. We were extremely impressed by the great feedback we got from the exhibitors. People felt it was their duty to use the system to rate meetings. We thus gathered 1800 responses or a bit above 50%. In the past only 22% of meetings were rates so naturally Goeffrey exceeded all of our expectations!—Gorazd Cad, Conventa

The system performed better than expected and engagement was top notch and the best thing is that we manage to save a couple thousand pages from being printed on. And if thats not enough, ask what it took Conventa this year to create final tally of all votes.

A couple of clicks.