JOAN Classroom keeps your campus a safe and secure space. Even when the power is out.

JOAN Classroom, our new classroom scheduling display, does much more than just manage university rooms more efficiently. In case of emergencies, the electronic paper classroom scheduler will also be able to transform into a real-time information board, showing relevant alerts at key points across the campus. All without wires and without access to the power grid.

In 1986, Jeanne Clery, a 19-year old Pennsylvania student was assaulted and killed in her bed, awoken while being robbed by a fellow student. He had gained access to her room through a propped-open door of the campus dormitory, the latest in a series of security incidents at Lehigh University.

What could have easily become just another sad statistic instead turned out to be the catalyst for improvements in campus security across the country. More than 30 years later, these improvements are aided by interconnected technology that allows higher education institutions to become smart about safety and effectively react to campus threats and hazards—be they man-made or natural.

Continuing the mission of making schools safe and secure is JOAN Classroom, the newest member of Visionect’s JOAN family of room booking solutions. 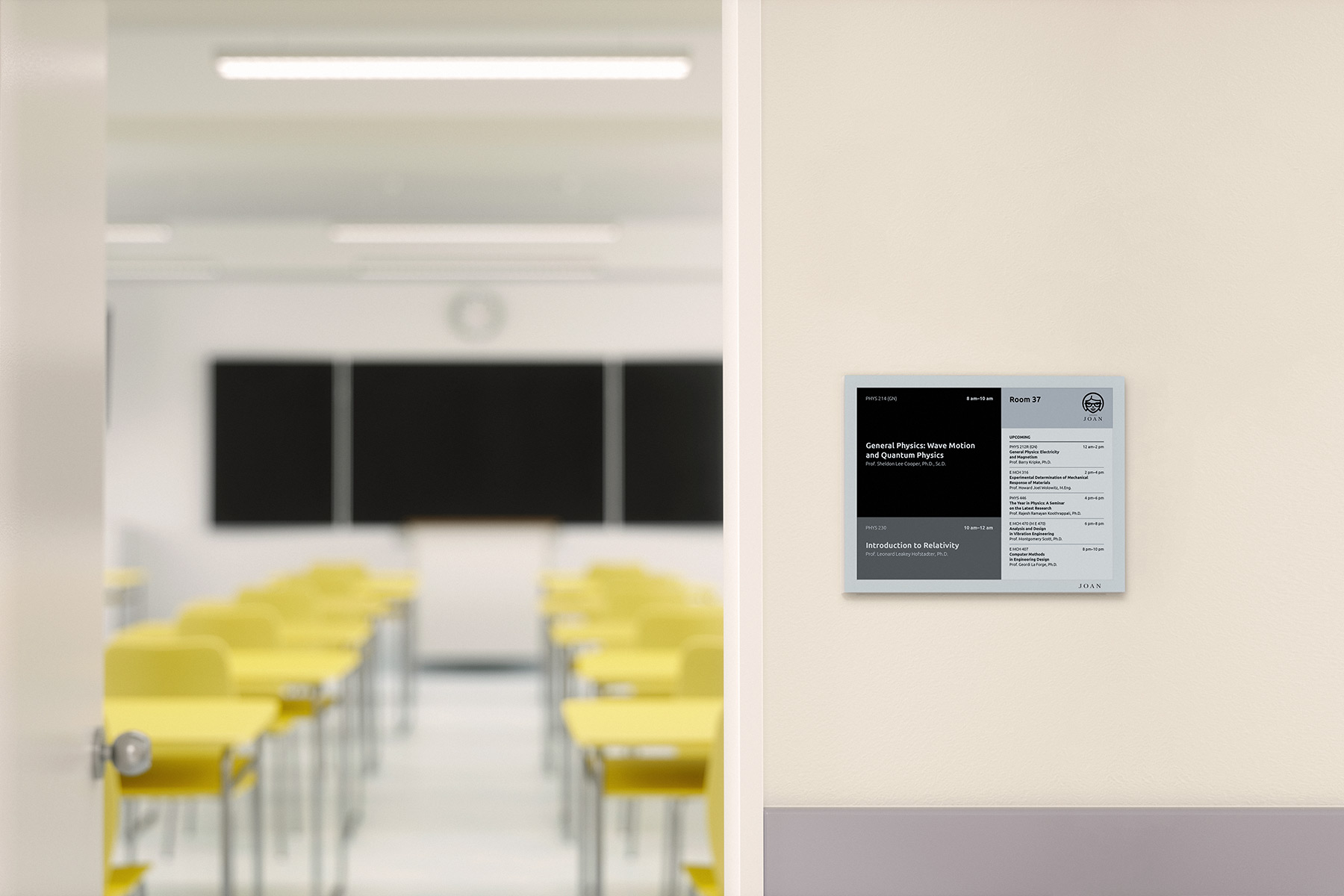 Created to help higher education institutions manage their rooms and resources more efficiently, JOAN Classroom will soon be able to do much more than just show the classroom schedule at the classroom door.

JOAN Classroom will instantly transform into an information screen, delivering alerts and warnings all across the campus grounds, completely independently from the power grid.

In case of emergencies and incidents, JOAN Classroom will instantly transform into an information screen, delivering targeted alerts and warnings all across the campus grounds, come rain or shine.

The upcoming integration with the Rave Alert™ mass notification system, in use by over 1,400 institutions of higher education, will allow JOAN Classroom to become an effective means of delivering on-campus security notices, eliminating doubt and confusion and communicating the relevant safety instructions, even in the most demanding of locations. 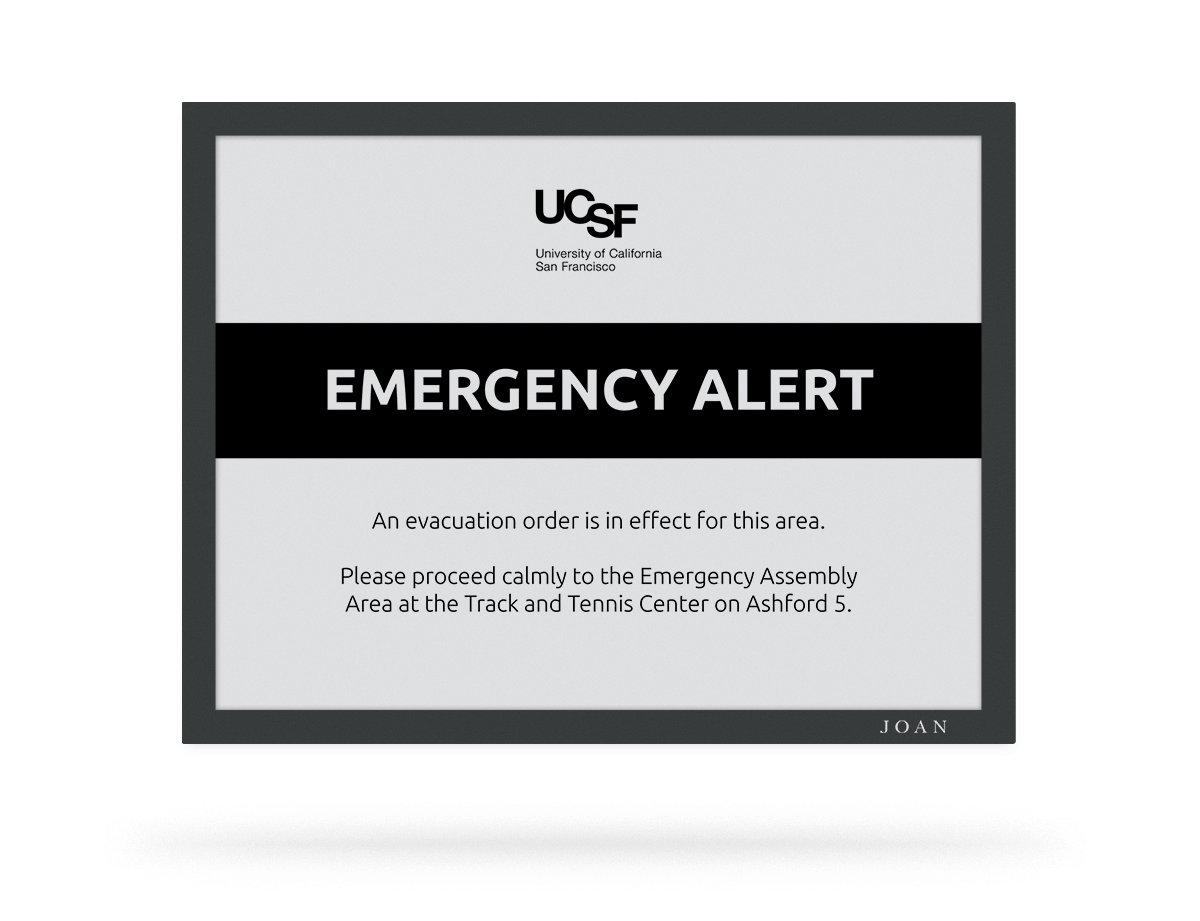 The duty to warn

Delivering effective safety and security information is especially important in light of the fact that college crime has long been a major issue for universities throughout the United States.

On-campus criminal offenses range from aggravated assault all the way to violent gun crimes that can be traced as far back as the 19th century. According to the U.S. Department of Education, in 2015 alone as much as 36,248 criminal offenses were reported across 11,306 American campuses; of these, 26,950 were violent crimes, such as robbery, arson or murder.

Effective campus safety should include timely crime alerts, weather warnings, public safety notifications and any other notices of dangerous situations.

Combating such statistics were Connie and Howard Clery, convinced that their daughter Jeanne’s death was a direct consequence of the university’s failure to share information regarding campus safety. The result of their efforts is the ‘Clery Act‘, the federal legislation which requires all universities and colleges that participate in federal financial aid programs to alert their students and staff of the imminent danger of crime.

The duty of a school to provide timely notifications about incidents that may pose a threat to students and faculty ought not, however, end with their legally prescribed duty to warn.

In the age of Hurricane Sandy and mounting social tension, effective campus safety should also include severe weather warnings, public safety notifications and any other notices of developing situations that may affect personal welfare.

These warnings must be delivered all across campus, no matter how demanding the installation location. 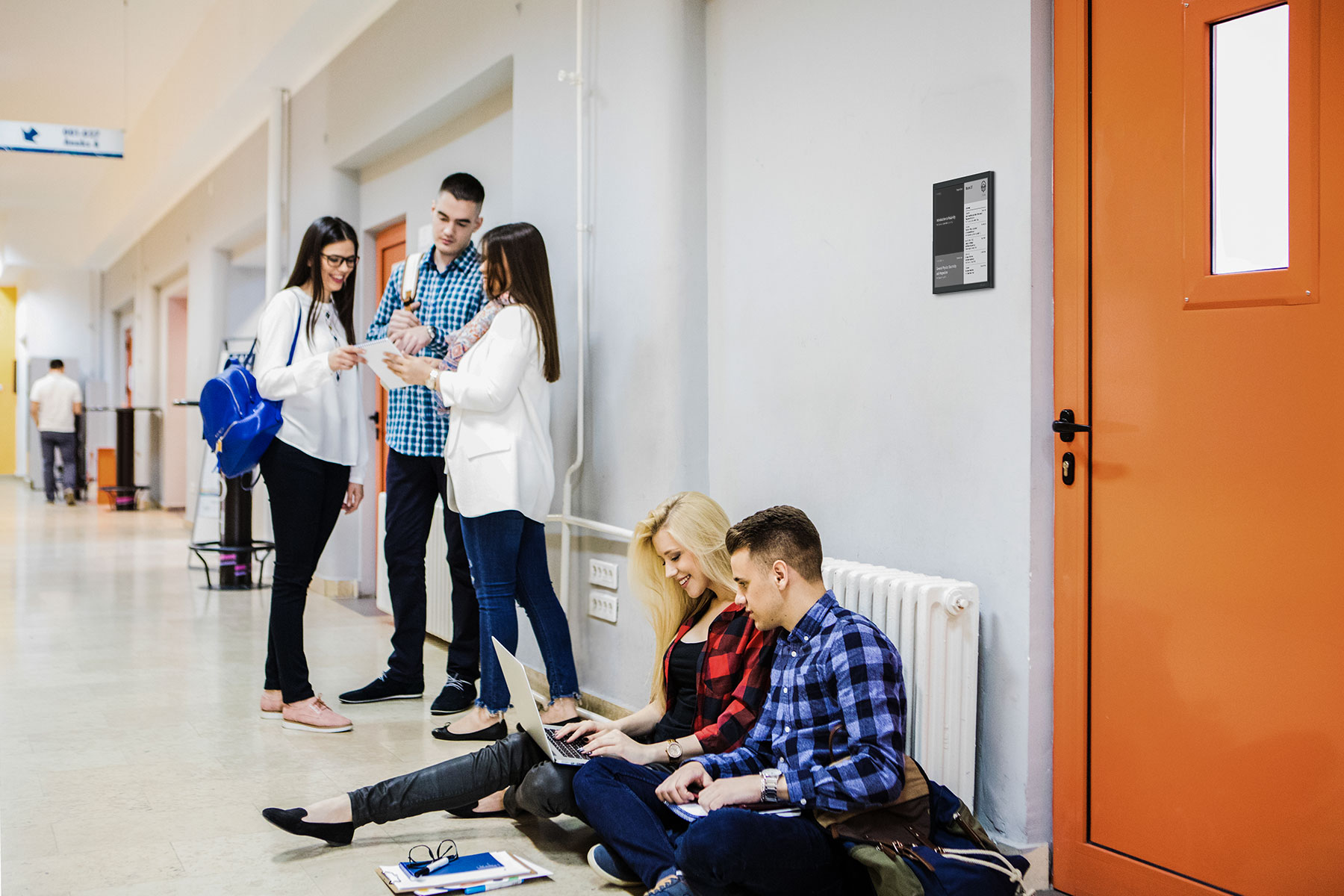 Look for JOAN Classroom just about anywhere: on the glass partition of the study room, the wooden door of the lecture hall or the brick wall of the university hallway.

JOAN Classroom uses 99% less power than LCD and can be powered by as long as 12 months on a single battery charge, making it completely independent from the electrical grid.

This adaptability is possible because of JOAN Classroom’s unparalleled energy efficiency. Developed on Visionect’s Place & Play signage concept, the culmination of a decade of cutting-edge research, JOAN Classroom uses 99% less power than LCD and can be powered by as long as 12 months on a single battery charge, making it completely independent from the electrical grid.

The implementation of JOAN Classroom becomes a zero-cost affair, unencumbered by cabling and building expenses that can run in the tens of thousands of dollars. With no wires whatsoever, there is no need for costly installations, which significantly lowers the total cost of ownership in introducing a campus-wide digital alerting system. 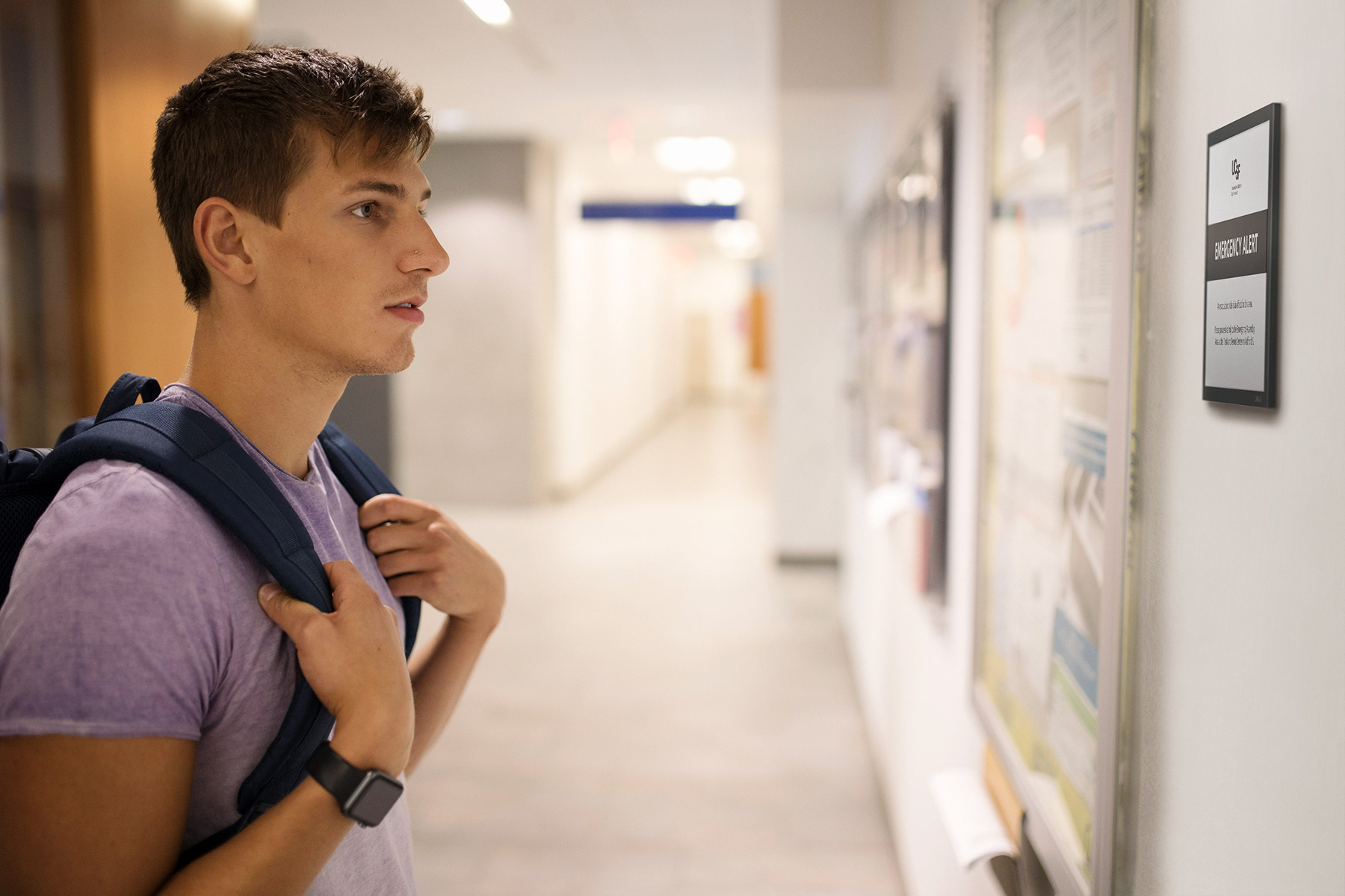 Communication when everything else fails

JOAN Classroom boasts an E Ink® electronic paper display that offers the feel of ink on paper, without glare or light pollution, finding its home in any interior.

In a power failure or a campus-wide network outage, JOAN Classroom will still provide crisis communication, even when everything else fails.

Because JOAN Classroom works for so long on so little power, it will remain functioning for up to a year, even in case of a power failure or a campus-wide electrical outage. Even when the lights are out and everything else fails, JOAN Classroom will still deliver executable crisis communication and ensure that the student body has access to clear instructions on what to do in the emergency at hand.

Even more: because electronic paper uses power only when changing content, should JOAN Classroom run out of battery, its screen will still hold the last alert displayed. This notification will be retained in perpetuity, with the ultra-reliable JOAN Classroom showing the warning on screen until the emergency passes and normal services are restored.

JOAN Classroom is currently available in preorders, open until November 7, 2017.

Wayfinding signage: Choosing the right one

LCD and LED roadblocks and how E-paper can solve them