Interview with Sri Peruvemba: “This is just the beginning”

Ron Mertens speaks with Sri Peruvemba, the newest member of Visionect’s Board of Directors, to find out more about the future of electronic paper, the success of JOAN and Place & Play, and where the market is headed. Continue on to read the interview, first published on E Ink Info.

First, an official bio: Sri Peruvemba is the CEO of Marketer International. His 25 years of experience in the electronics industry include marketing LCD, CRT, TFEL, OLED, LED, Plasma and ePaper displays into the consumer, mobile, industrial, medical, signage and TV markets. He earned a BSEE, a MBA and a Post Graduate Diploma in Management. He was previously CMO for E Ink and also held senior level positions at Sharp Corp, TFS Inc., Planar Systems and Suntronic Technology.

Peruvemba currently serves as Director on the Board of Visionect Inc., as well as on the board of the Society for Information Display(SID). 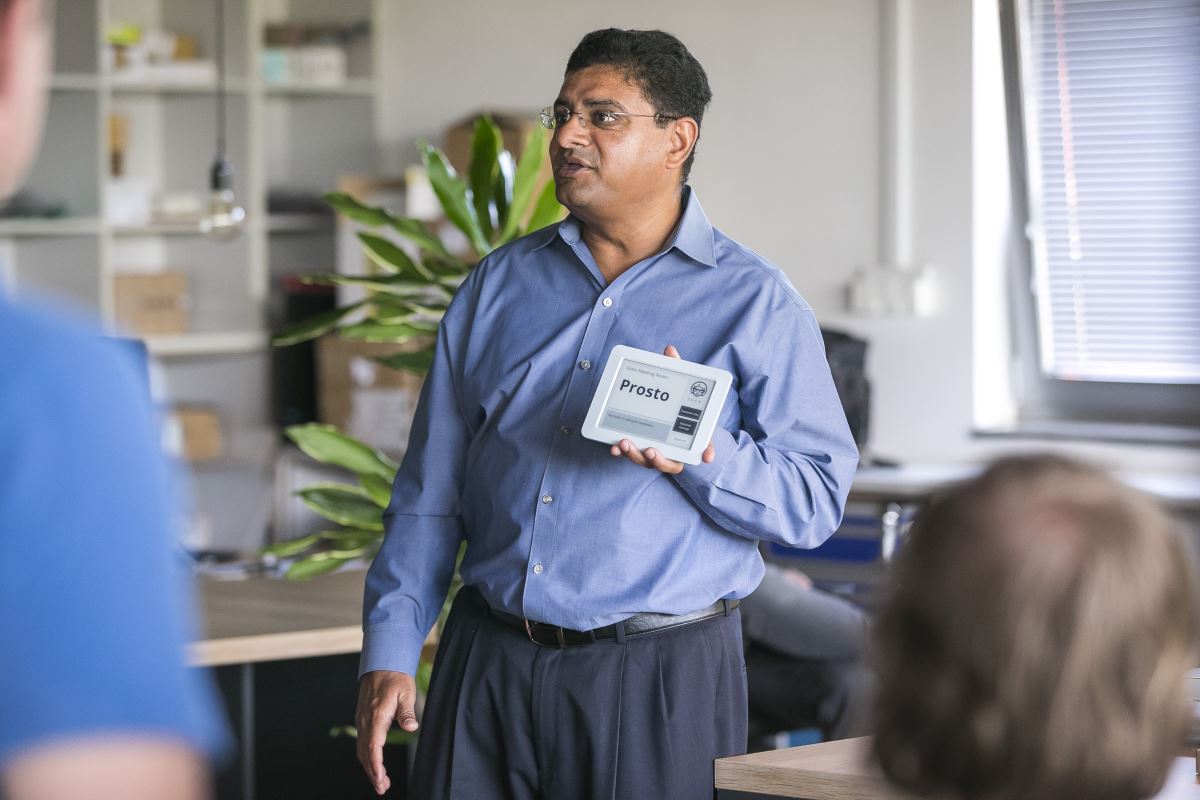 Sri Peruvemba demonstrates the use of JOAN, the award-winning room scheduling solution from Visionect.

Sri – thank you for this interview. You were part of the e-paper industry for many years, from your days at E Ink itself, and considered as a global display expert. How do you see the current e-paper market shaping?

There has always been a need for low power displays, until Electrophoretic displays came along and went into mass production in 2007, some of the reflective and transflective LCDs filled that need. There were a whole host of display technologies from Electrochromic, Electrowetting, MEMS, Memory in Pixel LCDs, Cholesteric LCDs, Electrofluidic, Electromagnetic and dozens of big and small companies pursuing them.

A few of them had success in niche applications but vast majority remain in the academic domain and in corporate labs. Creating a nice looking low power display is a non trivial thing. Electrophoretic displays in monochrome or single color (in addition to black and white) have made great headway in two major applications – eReaders and Electronic Shelf Labels (ESL) – taking a lion’s share in both applications. A third and fast emerging application is electronic signage where the low power attribute along with sunlight readability makes Electrophoretic displays (usually called ePaper) a great choice. This space has been growing rapidly in the past couple of years, particularly in the indoor signage applications where low power and unobtrusive displays are desired.

Visionect developed an interesting e-paper platform and provides solutions for e-paper applications. Can you tell us what is exciting you about Visionect’s offering?

Visionect has over a decade of experience driving electrophoretic displays, early on they realized that they could enable a variety of signage applications if they provided an easy-to- use platform consisting of hardware drivers, waveforms and software so that a designer can quickly build prototypes and the platform was such that you could buy ten or ten thousand. This strategy helped build an ecosystem and launch many prestigious signage projects in Australia, England, Slovenia, Estonia, Germany, USA and elsewhere.

It took a decade to master the art of making ePaper display systems, Visionect now has installations such as the traffic signs in Sydney, Australia where the displays are outdoors in direct sunlight, high temperatures, subject to dust and debris, so low power that they use solar panels and require no power cables and in spite of many industry firsts, here is the most impressive aspect of that project – zero failures. Not many companies, technologies or even projects can claim that in the entire display industry, Visionect’s technology team did it.

With this solid experience and proven track record, they have now launched complete systems in the form of indoor conference room signage like the JOAN family of products that are being deployed worldwide. To me this is exciting, the company is transforming itself from a custom display house to a true OEM while retaining its custom design work and supporting its legacy customers.

The JOAN meeting room scheduling solution is indeed one of Visionect’s high profile products. We understand that it is selling very well. Can you explain the market traction and value proposition of this product?

It is indeed. Launched last year, the JOAN series of products is doing extremely well, there are over 1600 customers in North America alone! Several thousands of devices have been deployed and the rate of market acceptance is rising. The value proposition for this product is quite simple, it’s a beautiful looking sign, looks like paper, it’s completely wireless both for data and power, you can stick it on the wall even, which is especially great if you have a wall made of glass, the battery life is extraordinarily long, most of all, this display does not distract the meeting room occupants. Its unlike backlit LCDs that shine a light and can be distracting.

Here is why the JOAN product is getting traction quickly: Visionect built this product based on surveying customer pain points and after they launched the product, they have added features based on constant customer interaction, this type of ‘customer influenced design (CID)’ is new to the entire display industry and Visionect has pulled it off.

Visionect recently announced a new product line called Place & Play. I understand you find this particularly appealing. Where do you see these devices being adopted?

I love this product. When I first saw the prototype, my first reaction was ‘this is an amazing looking product’, Visionect R&D outdid themselves with the Place & Play product. I see this product being deployed in places where there is currently a static paper sign, think of reception desks at hotel lobbies, in a clinic or hospital front desk, as a status display on the shop floor, as a pedestal sign at an airport or conference center, in IT managers’ offices or the factory managers’ control center, in education, as a monitor for JOAN devices deployed across an office, the applications are numerous.

Visionect has just concluded beta testing so Place & Play is now generally available to all customers.

ePaper displays are still quite expensive. Do you see lower cost e-paper solutions in the future? Will ePaper display makers be able to reduce production costs in the near future?

ePaper actually has less components than a LCD, when we were first evangelizing ePaper, we showed an LCD stack with all the layers and the ePaper stack was only a third as tall, less overall materials for sure. But virtually only one factory makes ePaper (Electrophoretic) whereas there are dozens and dozens of massive LCD factories in China, Japan, Korea and Taiwan that compete vigorously, this results in faster technology development and process development and materials development and logistics development all of which leads to lower cost and a legacy of low low pricing.

This comparison of a 200X larger LCD industry compared to ePaper gives the perception of higher prices with ePaper. I don’t see this changing in the near term. I do see lower prices in ePaper displays as volumes continue to ramp, competition in the form of other ePaper technologies that offer both newer features as well as reduce material stack and manufacturing complexity will also lower the prices. This is already happening and the prices are beginning to ease.

Visionect is winning business due to tremendous value add, elegantly designed, super easy to use products combined with a high quality technical and customer support component.

Back a few years ago many companies developed competing e-paper technologies, but it seems that today E Ink is pretty much alone (maybe together with reflective and bi-stable LCDs). Why did that happen? Why is there no competition and do you see new technologies that may emerge?

Simply put, E Ink had a great technology, the company took that from concept to commercialization with unrelenting focus of a startup, they made the right investments in people and infrastructure at the right time and left the competition behind. When I started at E Ink more than a decade ago, we were a small start up, our competition ranged from other similar sized startups to very large companies which in some cases invested over $1b to compete with us. We won because of that focus on a narrow, yet realistic, set of goals (my opinion). Today, they are building on that solid foundation. I left more than 4 years ago but continue to be one of their biggest fans and occasional critic.

The partnership between Visionect and E Ink started a decade ago, both companies have benefitted from the relationship and thanks to the leadership at each company, they are working together closely to break new ground, to create new products and win business in new applications in the broad signage space.

Where do you see Visionect in 3–5 years? Will the company focus on its own product lines such as JOAN and Place & Play or will it be more involved with supporting client projects?

It will likely do both. The legacy project-based business brings a level of learning and deep understanding of the market that allows the company to create standard product offerings based on combining features common to a large audience. The JOAN and Place & Play offerings bring Visionect directly in contact with the end customer to derive greater top line revenue and valuable brand building and a global footprint. I would love to see the company double or triple its business every year for the foreseeable future.

Where do you see the e-paper market in 3–5 years? Will there be a new killer-application that replaces e-reader as the mass market e-paper devices?

For the last several years, many of us in the industry, believed that a device, let’s call it eSchoolbook that replaced paper books in schools across the world will be created. I still believe in this vision, it’s not happening fast enough but there are many elements coming to play including new product features, new government initiatives, greater awareness and concern for health and trees (yep, those carbon absorbing, majestic trees that we cut to make paper) that will hasten this transformation. And we’re seeing products launched for the education sector, like JOAN Classroom, helping higher education institutions manage their rooms and resources. Since it’s integrated with CollegeNET’s 25Live, schools can forego paper schedules and the endless printing and putting up schedules. An integration with Rave Alert™ mass notifications is also coming soon, contributing to a whole new level of campus safety. The last alert even stays on screen even if there’s a campus-wide power outage.

Another transformation is taking place, much more quietly and could consume more displays by area that many other applications and that’s the signage applications. The value proposition is well demonstrated by devices like JOAN and Place & Play, this is just the beginning, companies like Visionect have a roadmap for many more products and any one of these could dwarf the eReader application.