A breakthrough development in e paper technology now allows e-paper to show its true colors for the first time ever. Forget the RGBW filters: we explain how the new full-color electrophoretic display prototype works and why it represents an important industry milestone.

The long and winding road

You might remember from our earlier article on e paper color displays that color and electronic ink have a long and fascinating relationship.

The road to a viable electrophoretic display (EPD for short) that would show vivid, bright colors while still retaining the extreme energy efficiency of electronic paper has been a winding one. An engineering challenge, the development of an electronic paper display in color was difficult due to the very nature of electronic paper technology itself.

Electronic paper goes by many names: e-paper, sometimes spelled ePaper, electronic ink and (generically, after the company that manufactures it) also e ink. All these names describe the same thing: a technology mimicking the appearance and readability of ordinary paper.

As we already wrote, electronic paper’s amazing visibility is possible because the technology works on the basis of small ink particles moving under an electric charge. The particles are contained within microcapsules of the display film, suspended in a fluid. Changes in polarity move the black and white particles around the capsule, moving them closer to the display surface and outlining an image on screen.

A traditional black and white or grayscale electronic paper display. The positively charged white particles and negatively charged black particles react to changes in electrical current, moving to the display surface and coloring the surface. (Image by E Ink ®)

What is simple in black and white becomes complicated when introducing additional hues.

As a segway to full-color, tri-color electronic paper screens were developed such as the Spectra display, which introduced a third color ﹘ red or yellow ﹘ to the epaper film, this time contained in a micro cup instead of a capsule. This allowed for changes in current to raise the red or yellow ink to the screen surface and color the corresponding screen area.

The most common solution to displaying color on e ink had traditionally been a color filter array overlaid over a black and white electronic paper screen.

The most common solution to displaying color on e ink, however, had traditionally been a color filter array overlaid over a black and white EPD. The pixels of the color mask are divided into groups of four sub-elements or more, coloured red, green, blue and white. When the white particles of the e ink display move to the surface, they reflect color by combining these colored sub-elements.

While convenient, the use of the color filter array means a decrease in screen resolution and muted colors. Because the color mask will require four or more subpixels to color each pixel of the display, the screen resolution is reduced on both axes. More significantly, a color mask will also affect the contrast and color correctness of the display, somewhat limiting its real-world applications. 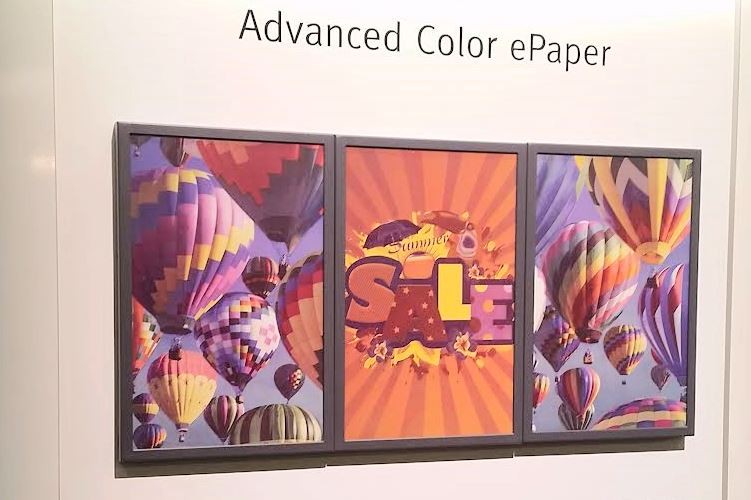 Introduced for the first time at this year’s SID Display Week, the new milestone in color EPD technology comes in the form of Advanced Color ePaper. For the first time ever, the electrophoretic display prototype can produce full color without the use of a color filter array, setting a new standard for bright, reflective e paper color displays.

For the first time ever, the electrophoretic display prototype can produce full color without the use of a color filter array.

But how does the breakthrough technology work?

According to the just-filed patent, the magic behind the full-color electronic paper display runs close to the technology of the tri-color screen. The only difference is that the micro cup now contains four different pigments instead of three: yellow, cyan, magenta and white.

These pigment ink particles are not identical. In addition to their color, they also differ in size, polarity and the strength of the charge they carry. This means that changes in voltage result in different pigment particles moving to the display surface. The color combinations of these moving particles result in up to 32,000 display colors, reports Mashable, with each ink-filled micro cup representing a fully-controllable color element of the EPD screen.

Changes in electrical current move different combinations of pigment particles to the surface of the true-color electronic paper display. These combinations result in up to 32,000 display colors (Image by Mashable).

The new true-color display retains the ultra-low power functionality of electronic paper as well as its readability, but adds so much more to the game: the option of using the screens in all aspects of commercial signage. Think vivid billboards and menu boards similar to printed posters, but fully digitalized, full-color bus stops and traffic signs powered by solar cells, and much much more.

The Advanced Color ePaper unveiled at SID Display Week is for now just a prototype, with some rough edges still left to iron out, among them the screen’s slow refresh rate. The first commercially-available color e ink displays are expected to hit the market in approximately two years.

When they do, you’ll be able to verify their amazing versatility as part of our product portfolio, making the quick mass deployment of real-color epaper an easily achievable goal.

Want to find out more about electronic paper? Read up on how epaper works, find out how the technology was born, or check out our interview with Barrett Comiskey, its inventor.