An electronic paper display for when Slack is no longer enough

The Millennials, a digitally native generation that will soon represent over half of the global workforce, expect the workplace to understand their values and needs. Among these is the need to connect with their coworkers online. We tested electronic paper as the platform for streamlining this communication.

Can you explain how Snapchat works? Do you take your smartphone absolutely everywhere you go, and swear by Twitter as your main news source? Would you sooner contact your friends via one of the many social apps instead of picking up the phone? For the millennial generation, the answer is a no brainer yes, yes and again, yes.

In 10 short years, Millennials will represent 75 percent of the global workforce.

The generation born between early 1980s and early 2000s was the first to grow up with computers and the Internet a fixed presence in their homes. Digitally native, they have been raised in a tech-saturated world and have learned to communicate electronically almost before they could write. And they are taking on the workplace. In 10 short years, Millennials will represent 75 percent of the global workforce. Visionect’s offices are no exception, with more than half of our team under thirty.

According to a recent Nielsen survey, Millennials cited technology use as the most defining characteristic of their generation, saying they believe it to be an enhancement to daily life. Most Millennials are also team-oriented and make friends with the people at work, blurring the line between their personal and professional lives.

And, boy, does our team like to make use of all the different apps and tech to share snippets of their lives and work. 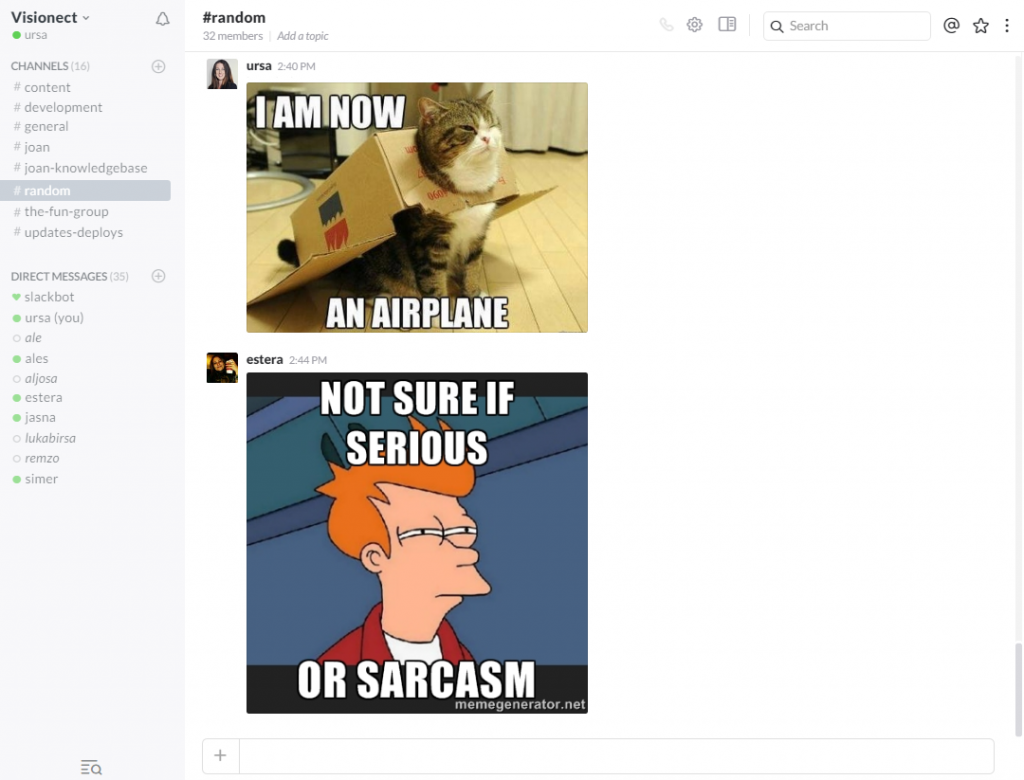 Visionect’s communications over Slack, just one of the online channels we use to communicate, are made up of memes, serious discussions about code and everything in between: useful articles to read, reminders that certain tasks need to be completed, and hungry summons to lunch.

Was there a way to combine all our lines of virtual communication into a single device that could streamline them even further?

We wanted to create something simple, yet useful, so we began prototyping on one of our 6’’ devices. It was as straightforward as a ‘If This Than That’ recipe and a Tumblr page.

Visionect employees use Slack for the day to day communications within the team, sharing everything from the code they need help with to pictures of funny cats. Asana is not only used as the tool to track everyone’s work tasks, but also as the place where the Visionect Book Club lives, with a list of must-read titles. The Endomondo sports tracker keeps tabs on who’s winning the year-long company fitness challenge. Then there’s Facebook, where the Visionect Community page lives, offering a sampling of interesting local events and a handy reminder when a coworker’s birthday pops up. Add to that Twitter, Instagram and Snapchat, and you have an ecosystem of smart apps that combine to provide a seamless and effective office interaction tool.

Which got us thinking. Was there a way to combine all these lines of communication into a single device that could streamline them even further? What can we do when Slack is no longer enough?

Because we love electronic paper, we started with one of our epaper development kits and took it from there. We wanted to create something simple, yet useful, so we began prototyping on one of our 6’’ devices, the same device that gave birth to our meeting room booking solution Joan.

Because Visionect development kits are out-of-the-box devices, with integrated Wi-Fi connectivity and centralized device management, all we had to do was create an online Tumblr site that fed to the display. The rest was as straightforward as a ‘If This Than That’ recipe that saw each new tweet from some of the office’s favourite news sources transformed into a simple Tumblr page, which in turn showed up on the display as a new status, fresh off Twitter. 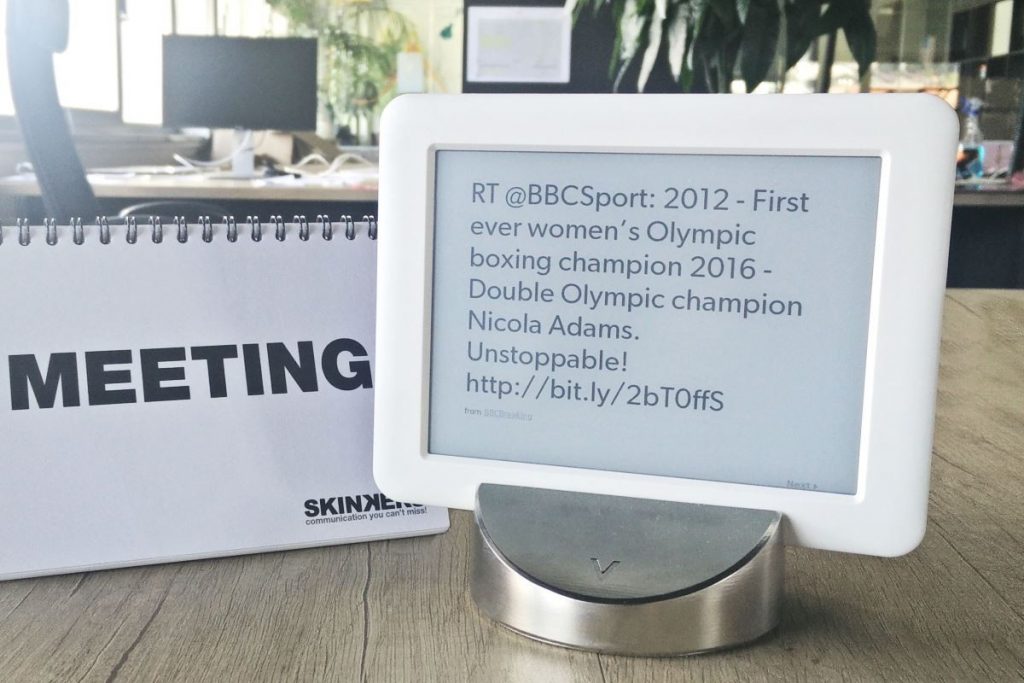 The first incarnation of our communications device. A Tumblr site is connected to an IFTTT recipe, showing the latest tweet from a select number of news sources. The Tumblr update is then fed to one of our 6” electronic paper devices via Wi-Fi.

Sticky board for the digital generation

But we weren’t just happy with beaming one social media platform to epaper, we wanted more, a screen that would hold all the tidbits from our beloved communications channels on one simple to read display. We needed a bigger boat!

We created our own, personalized company social network. An electronic paper sticky board for the digital generation, containing all the snippets and excitement that make up modern workplace communication.

We took our 9.7” electronic paper kit, fired up Tumblr again and added some HTML magic to divide the page between different real-time updates taken from social platforms, Gmail, Google Docs and more. All of these then fed to our new display, which refreshed its screen once per minute to show the most recent inputs.

One section of the screen again displayed the Twitter feed from various influencers, while another showed a snippet of the most upvoted article on Medium. Yet another portion featured a reminder from one coworker to another sent via a specially set up email address, and another the status of the company fitness challenge and the Visionect book club list. We also decided to incorporate items that before existed in printed form only: a funny ‘thank you’ sticker for the person that always makes the coffee, a Grumpy Cat meme for the person having a simply horrible day. The more we added, the more we wanted to add, and the more potential we saw.

The system slowly but surely took over our office. From the first two programmers happily experimenting on the display and sending each other snippets of code, each new functionality saw someone go “Oh, that’s nice!” and want a display of their own. Soon, everyone was in on the fun.

The result? A sticky board for the digital generation, containing all the snippets and excitement that make up modern workplace communication: funny messages, holiday snaps, light banter and even some harmless flirtation. We created our own, personalized company social network! 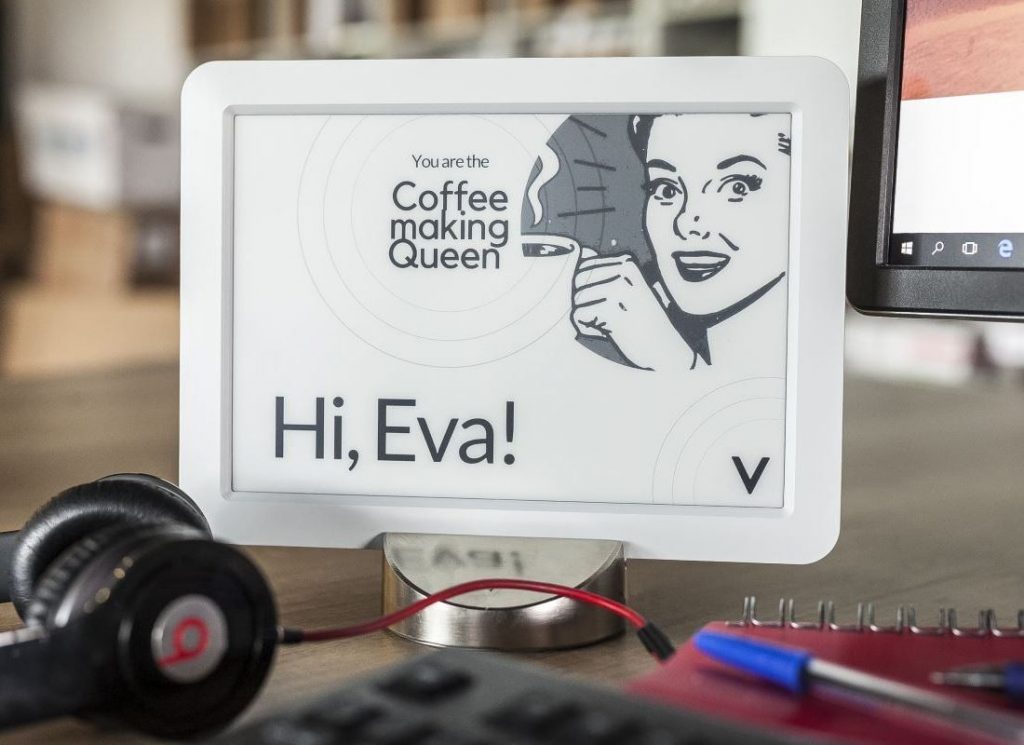 A personalized company social network on an electronic paper device. The welcome screen shows the personalized feed of the device’s user, with a funny sticker and designation delegated by coworkers. 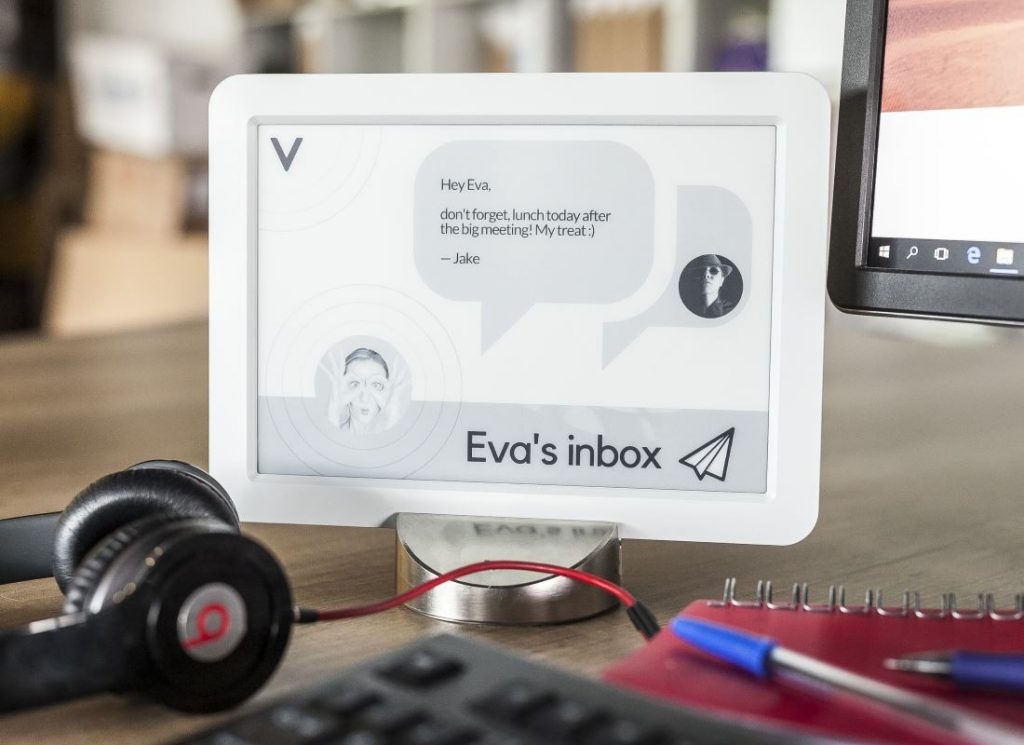 Another screen of the millennial communications display shows the latest message sent from one coworker to another via a specially set up email address. The result is an email inbox with the readability of a Kindle. 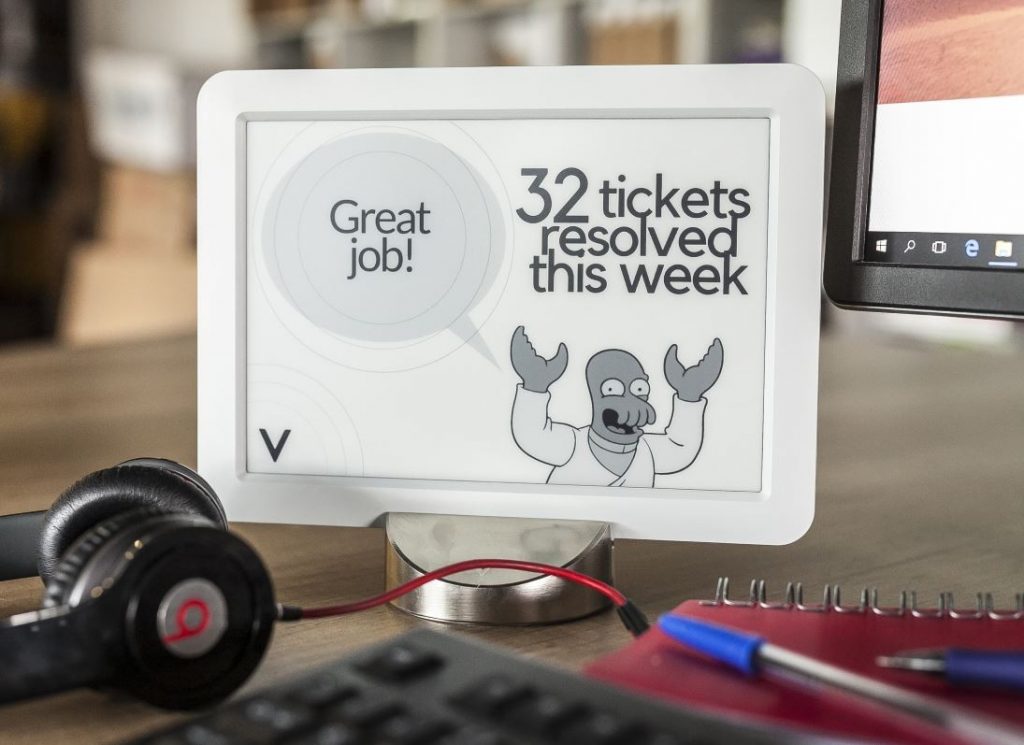 Instead of keeping up with the customer support tickets on Zendesk, a quick overview of an employee’s personal track record of tickets resolved can be seen on the electronic paper screen. 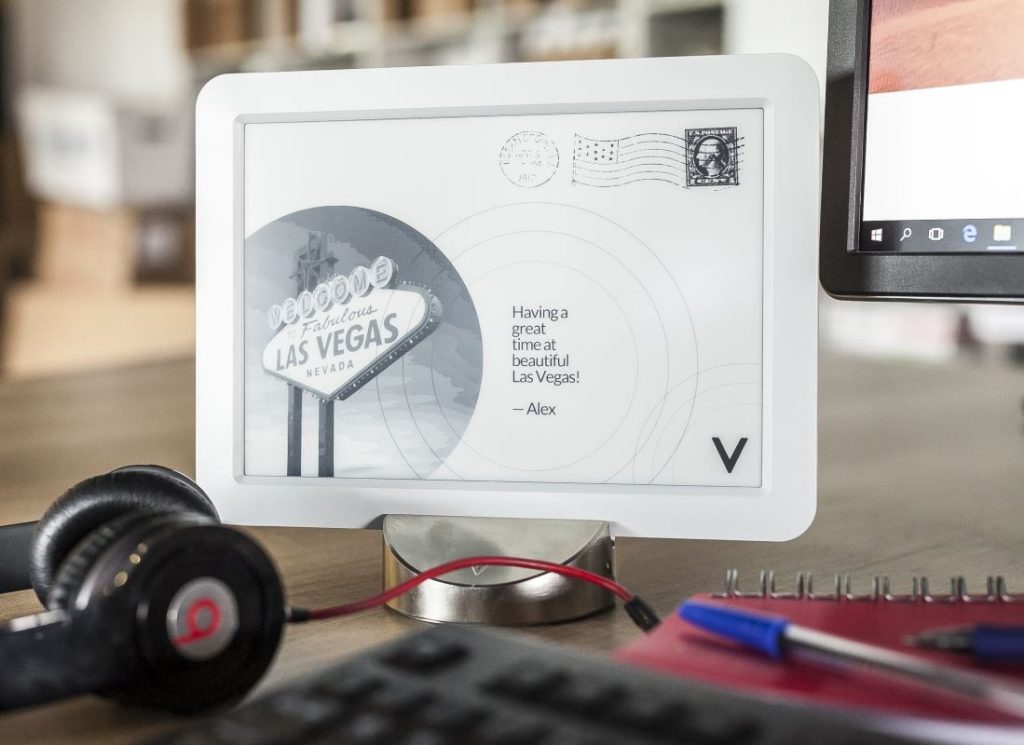 Not in the office? Why not send a snap of your holiday to a coworker’s email address, with a short message attached, which will then be forwarded to their e-paper device. 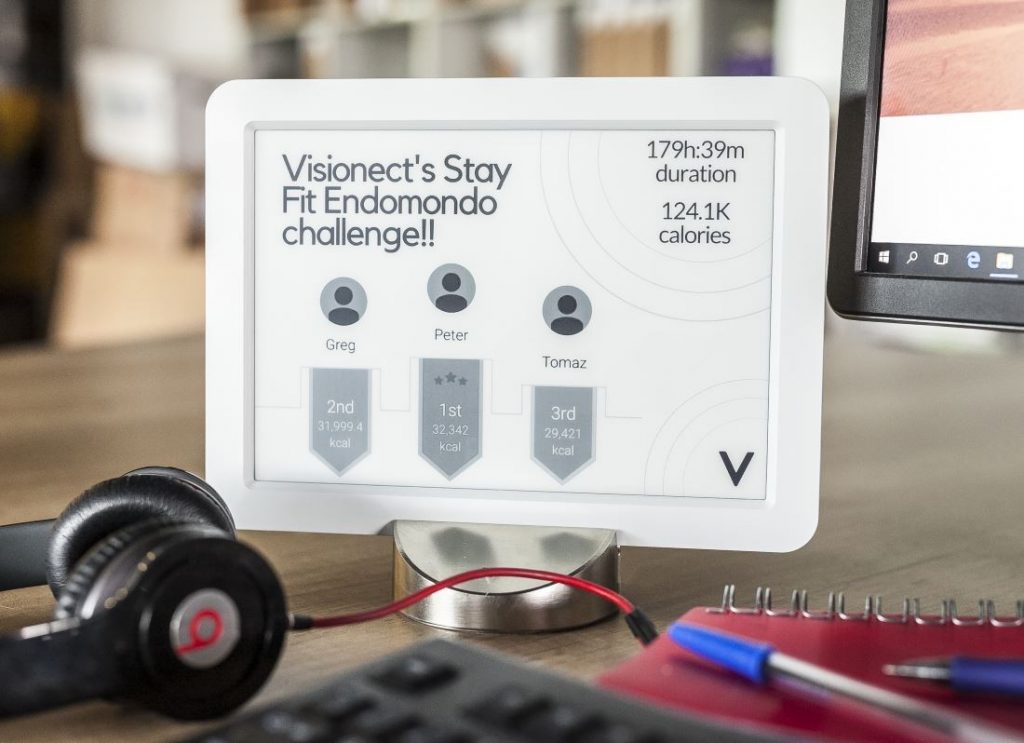 Feeding from Endomondo is the Visionect stay fit challenge, displaying the athletic prowess of those office heroes that track their fitness goals via the mobile app.

More than just fun and games

All this prototyping, however, was not just for the sake of fun and games. In an era where many choose their future employer because the company aligns with the way they see the world, listening to your younger workers’ needs and catering to them can prove vital in hiring and retaining staff.

All this prototyping, however, was not just for the sake of fun and games. Millennial employees, reports show, work harder and remain more loyal if they believe you understand them and their needs.

Because Millennials have different attitudes, expectations, values and approaches to work, not supporting the values and priorities of your employees can quickly backfire. According to the New Ways of Working report, digital natives are likely to change jobs very frequently, with 65% of millennials stating that the opportunity for personal development was the most influential factor in selecting their current job. One in three also say that they would prioritise social media freedom over salary in accepting a job offer.

Simply put, writes Steven Kaufman of Entrepreneur, millennial employees work harder and remain more loyal if they believe you understand them and their needs. What better reason to throw add a little e-paper prototyping into the mix.

But don’t take our word for it: grab one of the electronic paper development kits and start experimenting with the technology yourself. Who knows, you might just stumble across the next big thing. 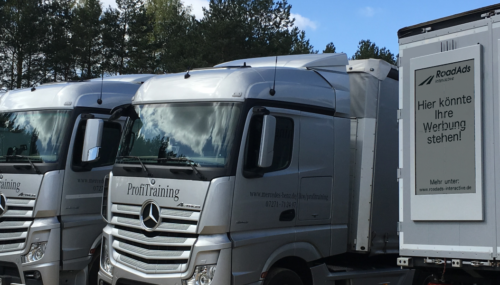